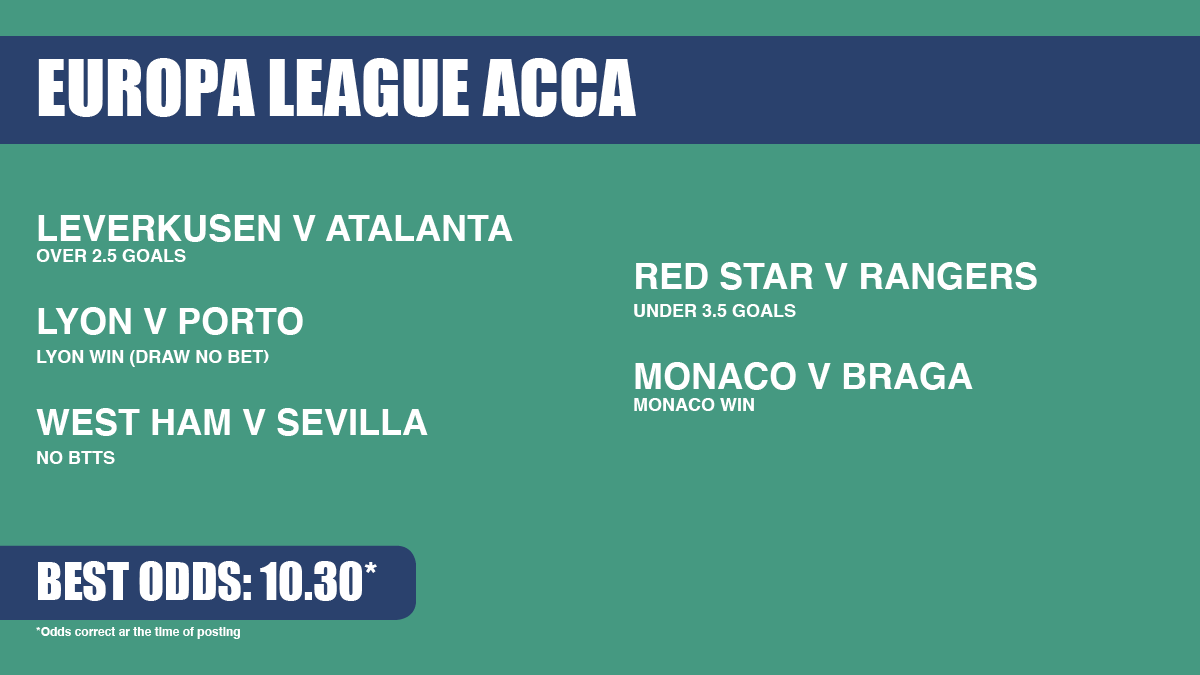 The Europa League is really starting to hot up now with the second legs of the last 16 to be played this Thursday and a place in the quarter's at stake. Second legs can often be easier for bettors than first legs, given that the two teams have already faced off for 90 minutes and you have a better picture of how the two sides might match up.

However, the first leg also creates a different context for the second leg which could affect certain markets in particular - for example, if a team is down by 2 or 3 goals they will be forced to attack right from the first whistle which could make bets like BTTS or over 2.5 goals more likely. That said, we've picked through the stats and the odds, and here is our Europa League accumulator tip for Thursday's games.

Lyon are unbeaten in 7 European matches, and Peter Bosz’s side have actually won 6 of those. Porto are flying domestically and sit 6 points clear in the Primeira Liga, but have found life tougher in Europe recently. They have not won in 4 European away matches, and have only won 1 of their last 6 at any venue. However, they have picked up draws in 3 of their last 4 on the road in continental matches so should be respected. Using the draw no bet market reduces the odds (at the time of writing) from 2.28 to 1.70 but we recommend it in light of the aforementioned stats.

At least one team has failed to score in all 4 of West Ham’s Europa League home games so far this season. In fact, BTTS has only been a winning bet once in their 7 UEL outings so far this campaign at any venue.

BTTS No has also been the correct prediction in all 3 of Sevilla’s last 3 European away fixtures, and it was also the right call in the first leg clash between these sides last week at the Ramon Sanchez-Pijuan. At the time of writing the best odds available for this pick are 1.90.

If goals are likely to be at a premium between West Ham and Sevilla, the stats suggest the opposite will be true in this clash. There have been an average of 3.9 goals per game in Leverkusen’s last 20 European fixtures dating back to February 2020 - 2.5 per game for the German side and 1.4 against.

Additionally, there have been over 2.5 goals in 9 of Atalanta's last 10 European matches, and in their last 7 there have been a total of 35 goals (5 per game). Of course, that run includes the first leg clash between these sides, where there were 5 goals scored in total.

After coming away with an incredible 3-0 win from Belgrade, Rangers will be looking to keep things tight on their own patch in this one. Obviously, the Serbian side will need to attack if they are to have any chance of winning the tie overall, but that isn’t something they’ve been particularly used to or successful at in recent times in European competition. There have been under 3.5 goals in all of their last 8 UEL contests, and they have managed to score just 4 goals in their last 6 outings in the competition.

Let’s look at Rangers then. If you take out their goal-filled tie with Dortmund - who seem to score and concede goals no matter who they play - all of the Scottish team’s last 13 European clashes have also featured fewer than 4 goals.

Braga beat Monaco 2-0 in the first leg of this tie, so it might seem strange to be picking so firmly the other way in this leg. However, Braga are a very different side away from home than they are on their own turf at the Braga Municipal Stadium. Carlos Carvalhal’s men have lost 4 of their last 5 away matches in the Europa League. In fact, in the previous round they progressed past Sheriff Tiraspol on penalties after losing the away leg 2-0 and winning their home leg by the same score line.

As for the hosts, Monaco’s defeat to Braga in the first leg of this tie was their first in 8 European matches. They have won 3 of their last 5 at home in continental competition and will be hoping to put in a better display in front of their own fans in this second leg.

The best odds for this accumulator at the time of writing, available from 888 Sport.

To build your own accumulator using stats across 15 markets and over 30 leagues check out our dedicated accumulator tips page.

Or visit our Europa League hub for stats, odds, predictions and detailed betting previews for matches in that competition.