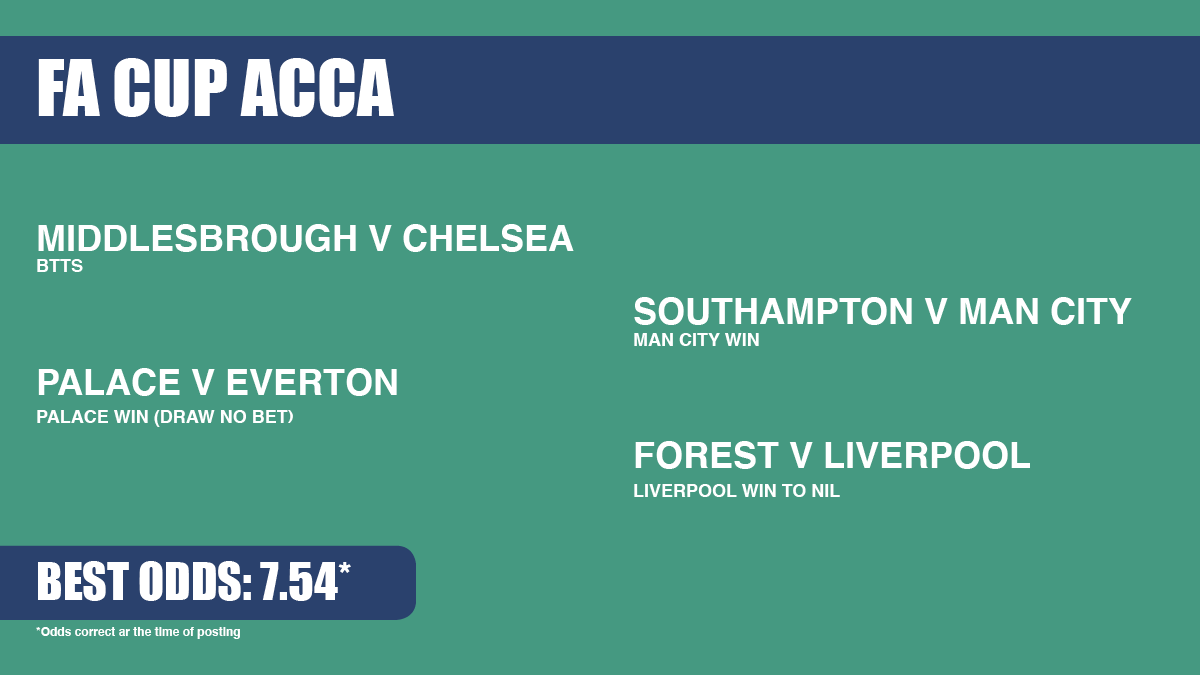 The magic of the FA Cup might have been diluted somewhat in recent years, as the country’s biggest teams have tended to dominate despite often playing weakened teams as they vie for supremacy in the Premier League.

However, with two Championship sides in this year’s quarter final - both of whom have knocked out some of the biggest names in English football - that could be changing. Of course, those upsets could make it tougher for bettors. Here are our best stats based picks for this weekend’s action put together in a simple 4-fold accumulator. Let's get into it.

Predicting anything that might happen next at Chelsea football club is a tricky task at the moment. However, let's try to stick to the stats and cancel out the noise around the club as they suffer under sanctions imposed on owner Roman Abramovich.

Chelsea have scored in 10 of their last 11 matches, and in fact have only failed to score against Liverpool and Manchester City in their last 19. Meanwhile, Middlesbrough have failed to score in just 1 of their last 12 matches in all competitions. With both sides so hot in front of goal and the theoretically weaker Championship side playing with the support of their own fans, we’re backing BTTS at the Riverside.

Everton have lost 4 consecutive away matches in all competitions. In fact, their only normal time win on the road in their last 13 attempts was a 3-2 victory over Hull in the last round of this competition. Crystal Palace, meanwhile, have been on a good run of late. The only side Patrick Viera’s men have lost to in their last 9 contests was Chelsea, and even then they went down to a narrow 1-0 defeat. Palace are unbeaten in 5, and have won 3 of those.

It should also be noted that while Crystal Palace have effectively nothing left to play for in the league and can concentrate fully on potential glory in this competition, Everton are right in the thick of a relegation battle. That could cause the manager to limit minutes for certain players in case they pick up an injury, or might just serve as a general distraction. Do these Everton players  - and their manager Frank Lampard - really want to add more games to what is likely to be an already congested run in?

Southampton got a draw against Pep’s men the last time these two sides faced each other back in January. However, that was in the midst of an excellent run for Southampton which saw them lose just once in 13 matches in all competitions. The wheels seem to have fallen off in recent weeks for Ralph Hassenhüttl’s charges who have lost 3 matches in a row, including a 4-0 defeat to Aston Villa.

Manchester City have been held to two 0-0 draws on the bounce, but have still won 8 of their last 10 away matches. They have conceded just 3 goals across that 10 game span, so one goal could well be enough to win it for them at St. Mary’s.

After a professional performance against an excellent Arsenal side in midweek, Liverpool have now kept 5 clean sheets in a row and won 4 of those clashes in normal time - they won the 5th on penalties against Chelsea in the Carabao Cup final.

Nottingham Forest are likely to put up a serious fight in this one, having beaten Arsenal and Leicester to get to this stage of the competition. They have won 8 of their last 9 matches in all competitions, and have scored at least one goal in all 9.

However, it's crucial to stress that Liverpool have faced tricky challenges before. Those 5 straight Liverpool away clean sheets include fixtures against Arsenal, Chelsea and Inter Milan. Van Dijk and co. have the ability to keep out even the most potent teams.

To build your own acca check out our accumulator tips hub which has stats, odds and predictions for hundreds of matches across more than 30 leagues and competitions in 17 markets.

This entry was posted in Accumulator, FA Cup
and tagged Accumulators, FA Cup, football accumulator tips. Bookmark the permalink. Both comments and trackbacks are currently closed.