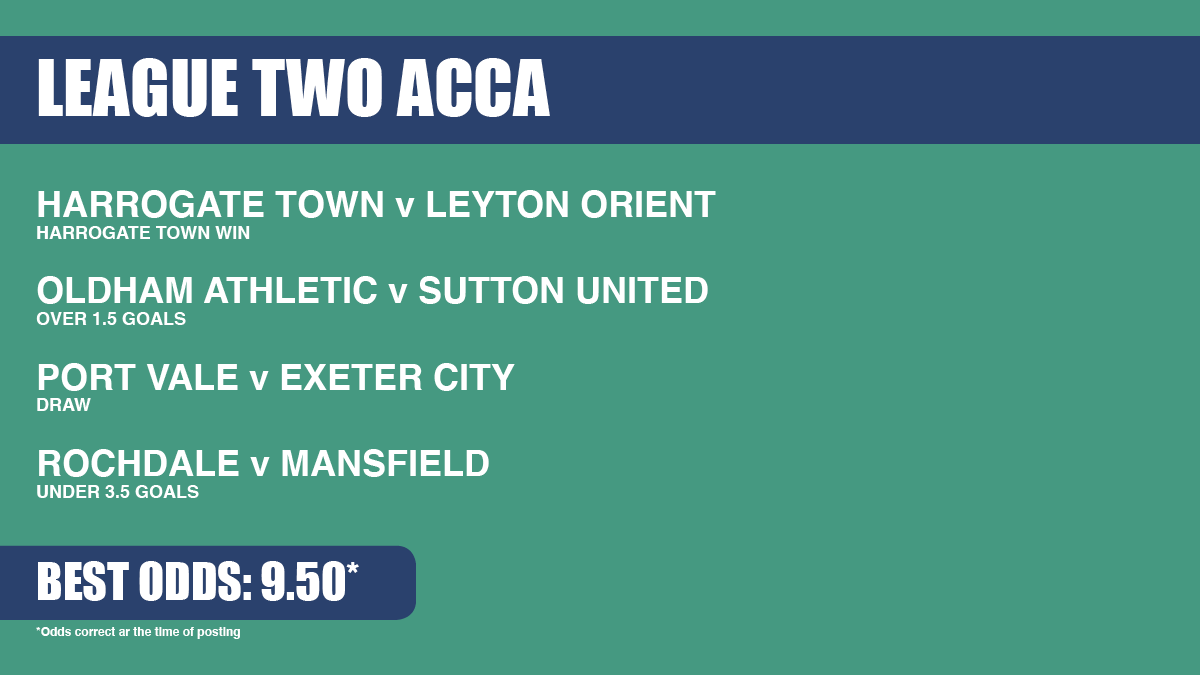 With no Premier League or Championship action and just one game in League One, a lot more eyes than usual will be on the League Two matches this midweek. The big game is obviously at Vale Park where it’s 8th vs 2nd as Port Vale host Exeter. The two sides are separated by just 5 points, and 8th placed Port Vale have 2 games in hand on all the teams between 7th and 3rd.

Both are in excellent - and very similar - form. Port Vale have won 3 straight league games, while Exeter have picked up 3 from their last 4. It wouldn’t be a huge surprise if both were playing League One football next season.

Elsewhere it’s all about the relegation battle, with Leyton Orient (18th), Rochdale (19th), and Oldham (23rd) all in action. But while Rochdale (unbeaten in 11 at home) and Orient (unbeaten in 5) look to be pulling away, Oldham are sinking having lost 4 on the bounce.

Oldham face Sutton, against whom they pulled off a huge 2-1 away victory back in August. It feels as if they might have to repeat the trick on Tuesday if they are to stay up. Sutton are 4 points back from a play-off place as things stand but this is effectively a game in hand on many of the teams above them.

Rochdale host Mansfield who have only played 34 matches, compared to many teams currently occupying the top spots who have played 38. 4 wins in those games in hand could theoretically take them to 68 points and 2nd place. That has to start on Tuesday though.

Leyton Orient travel to Harrogate in the early kickoff (19:00) and will be hoping to take advantage of the home side who haven’t won in 7. The only concern for them will be their away form which has seen them go 13 on the road without a victory.

But what should you bet on in these matches? Well, here’s our accumulator tip for Tuesday’s matches.

We’ve already discussed Harrogate Town’s recent struggles. However, Simon Weaver’s side’s form can partially be explained by their opposition. Trips to Tranmere (5th) and Bristol Rovers (4th), plus a home clash with Port Vale (8th) were always going to be tough. Harrogate have generally done well against the weaker teams in the division this season, and have not lost at home to any of the bottom 11 (W5 D2).

Leyton Orient have picked up points consistently on the road this season, but wins have remained elusive. In fact, they have drawn all 9 of their away matches against teams below 10th this season. Another draw would be far from a shock in this one - but Harrogate will be back on home turn against a weaker opponent for the first time in a while and will fancy themselves to get the job done.

Oldham haven’t been successful this season, but they have tended to produce entertainment this season. 8 of their last 9 league games have featured at least 2 goals - unfortunately for Oldham those goals have largely  ended up in the back of John Sheridan’s side’s own net (9 in their last 5 matches to be precise). Sutton are unlikely to spoil that run of over 1.5 goal matches - 14 of their 18 away league games this season have featured at least 3 goals.

We’ve already talked about how much there is at stake in this clash. Such pressure can often produce tight, tentative matches. Combine that with the fact that both sides are in excellent form, and form that is almost identical too.

These sides just seem very difficult to separate. At the time of writing the best odds available for the draw in this one are 3.30.

Rochdale have not scored more than 1 goal in a single League Two match in 7 attempts. In fact, they have only completed that feat once in their last 14 league fixtures. 13 of their last 15 league clashes have ended with both teams combining to score fewer than 4 goals. Away from home Mansfield have also struggled in front of goal, managing an average of just 1 goal per game in their last 20 league fixtures on the road.

Something about the alchemy of these two sides together also seems to fail to produce thrillers too. Just one of their last 11 league meetings since 2004 has produced over 3.5 goals - that was a 0-4 away victory for Rochdale in 2008. None of the last 5 meetings at Spotland Stadium has produced 4 goals.