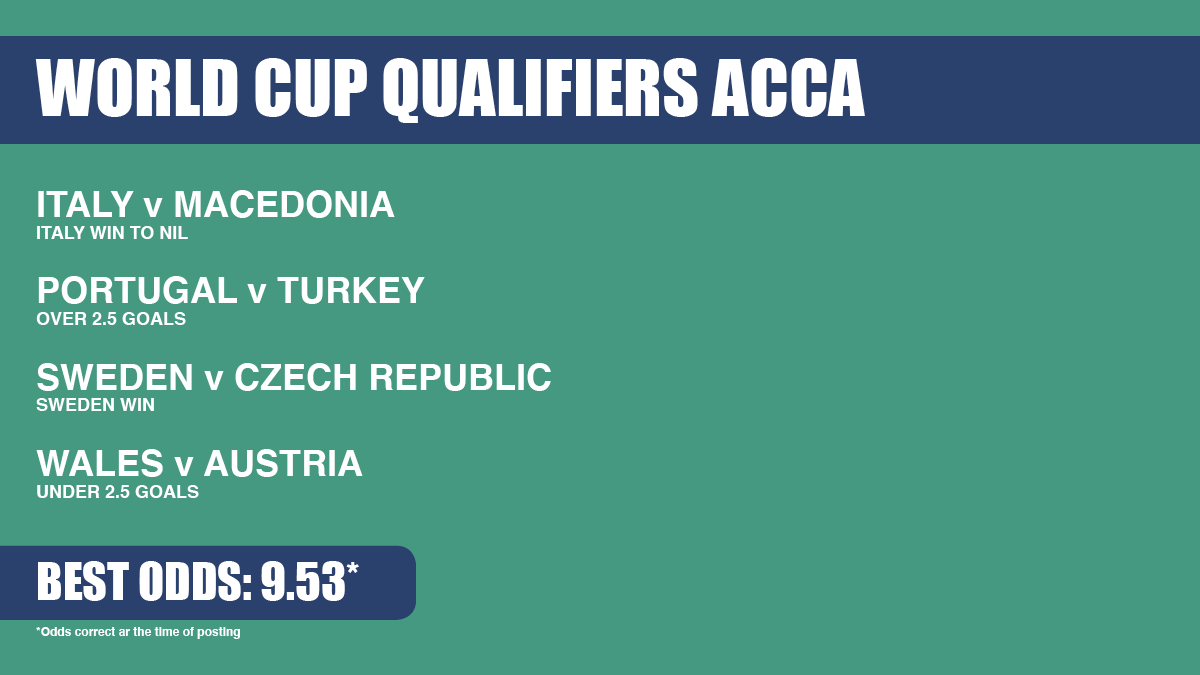 We've selected the best bets for each European World Cup Qualifier Play-off game from 4 different markets, based on our stats and algorithmic prediction, and bundled them up in an easy acca for you. Let's get into it.

Italy have only conceded 2 goals in their 8 World Cup qualifying matches so far. Roberto Mancini might consider them a little unlucky not to already be in the hat for the Qatar 2022 group stage draw. They face a Macedonia side who have failed to score in 3 of their last 7 qualification fixtures. Our algorithm based on thousands of previous fixtures, predicts there is a 53% chance that this game will finish with a win and clean sheet for Italy after 90 minutes.

After failing to deliver as many people’s “dark horses” in last summer’s delayed Euro 2020 tournament, Turkey have at least delivered entertainment during this World Cup qualifying campaign. 9 of their 10 qualifying matches have featured over 2.5 goals, and on average there have been 4.3 goals per game. Highlights from their group games include a 4-2 victory over the Netherlands, a 6-0 thrashing of Gibraltar and a 3-0 victory over Norway. Netherlands did, however, beat them 6-1 on their home turf.

Portugal would have expected to qualify from a group containing Serbia, Ireland, Luxembourg and Azerbaijan. However, having finished second to Serbia they will have to come past Turkey here. From a neutral perspective, we can only hope they keep up the entertaining form they showed in their group which saw them score 17 goals in 8 matches. 6 of the 8 finished with over 2.5 goals on the scoresheet.

Sweden have been imperious at home so far in European  qualification and their fans, players and manager Janne Andersson must all be delighted that this one-legged play-off will be held at home. Sweden have won all of their last 4 home qualifiers, scoring 8 goals and conceding just 1 in the process. The only goal they have conceded was to a Carlos Soller volley as they beat Spain, who are currently ranked as the 7th best side in the world, 2-1. Czech Republic beat Belarus and Estonia on the road in their group, but came up short against the quality sides in Belgium (3-0) and Wales (1-0).

This is one of the most evenly poised clashes in this phase of the European World Cup qualifying play-offs. Both sides qualified for, and did well at, Euro 2020 last summer and both tend to prefer to keep things tight if possible. There were under 2.5 goals in 3 of Wales’ 4 group stage home games, largely thanks to their excellent defence which conceded just 2 goals in those matches. 3 of Austria’s 5 group matches also finished with under 2.5 goals on the scoresheet. With so much at stake, backing another tight affair here seems tempting.

This entry was posted in Accumulator
and tagged Accumulator, Accumulator Tips, international football, World Cup. Bookmark the permalink. Both comments and trackbacks are currently closed.