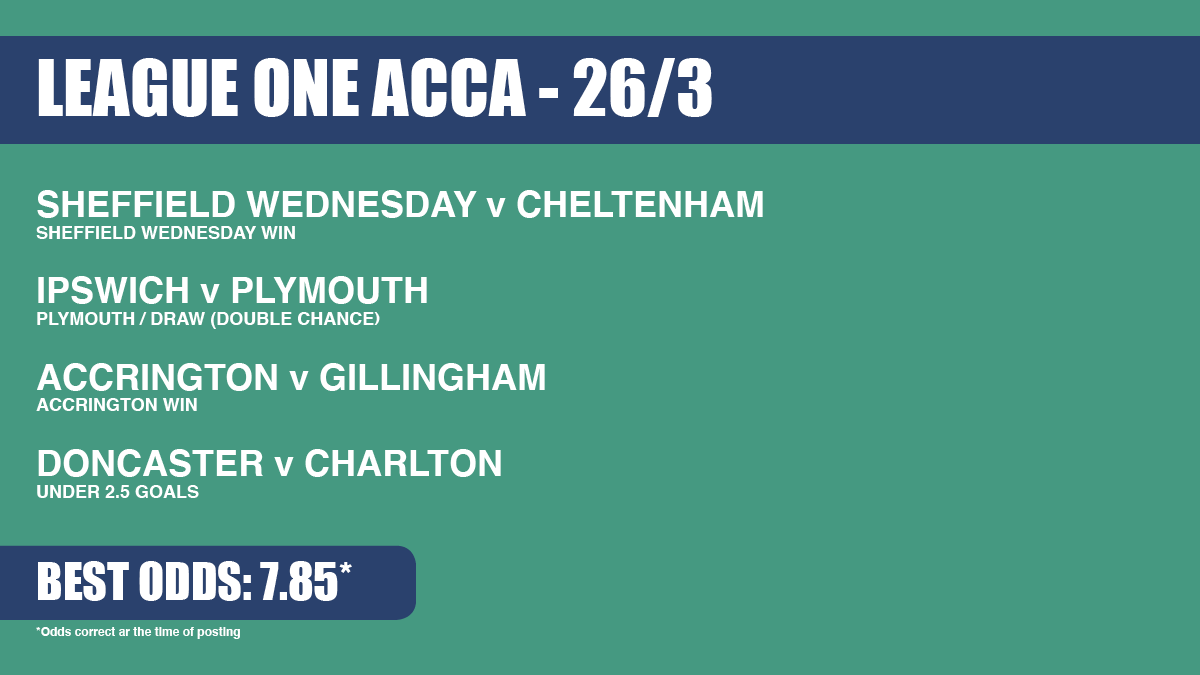 It’s not a full League One calendar this Saturday, but there are 6 matches to keep fans of England’s third tier entertained. The action is largely centred on teams at the wrong end of the table with Gillingham (20th), Wimbledon (21st) and Doncaster (23rd) all in action. By contrast, none of the top 3 are in action, with 4th placed Plymouth’s trip to Ipswich (9th) and Sheffield Wednesday’s home clash with Cheltenham the only matches likely to have serious promotion implications.

Sheffield Wednesday are the hottest favourites to win of any team in League One on Saturday according to the bookies. They have won 7 of their last 9 at Hillsborough - the only defeat coming at the hands of league leaders Rotherham. Wednesday could go as high as 5th with a win here (it would require a 6 goal margin to sneak into 5th ahead of Oxford United).

The visitors on Saturday will be Cheltenham who have lost 2 of their last 3 on the road, and have won just 1 of their last 10. Away to the top 8 this season their record is disastrous - D2 L5.

Plymouth have won 6 consecutive league games without conceding a goal, and yet are available at odds of nearly evens merely to avoid defeat on their trip to Portman Road. Now, it is fair to say that Ipswich have been good at home this season - they’re unbeaten in 9 on their own patch, and have taken maximum points in 6 of those. They are also in good form generally, and are unbeaten in 10 home and away - they have only won 5 of those though.

The crucial element that makes this bet incredible value is this though. Ipswich have played 11 matches against teams currently in the top 7 this season. They have not won any of them. Are they really going to break that duck against a team who have won 6 straight, with 6 clean sheets, and 12 goals scored.

Accrington probably wish they could play all their games at home at the moment - John Coleman’s side are unbeaten in 9 on their own turf, and have won 4 straight there. It really is nothing short of promotion form from a side who find themselves mired in mid-table mediocrity as things stand.

Gillingham have started to pick up points away from home in recent weeks, having not won in 10 on the road between 9th October and 12th February. However, they have only beaten fellow strugglers in Doncaster and Lincoln. 17th placed Cambridge remain their highest placed scalp on the road this season. In-form Accrington are likely to be a very different proposition. In all Gillingham have lost 15 of 22 matches against the top 14 this season.

Doncaster have failed to score in any of their last 3 league games, and despite picking up 1 point in that time they now look likely to be playing League Two football next season unless they can start finding the net very quickly. Charlton have actually kept 2 clean sheets in a row and 3 in their last 4, although they are much more defensively sound at the Valley.

It will give them confidence on their coach journey to the Keepmoat Stadium though, to know that they have kept a clean sheets in their last 2 league meetings with Doncaster. That includes a 4-0 thrashing they meeted out back in October.

As far as this bet’s concerned though, even if Doncaster do score, Chartlon haven’t exactly been rolling in goals lately - they have failed to score in 4 of their last 7.

For League One match previews as well as more stats, tips and predictions check out our league hub. To build your own accumulator check out our acca tips page.