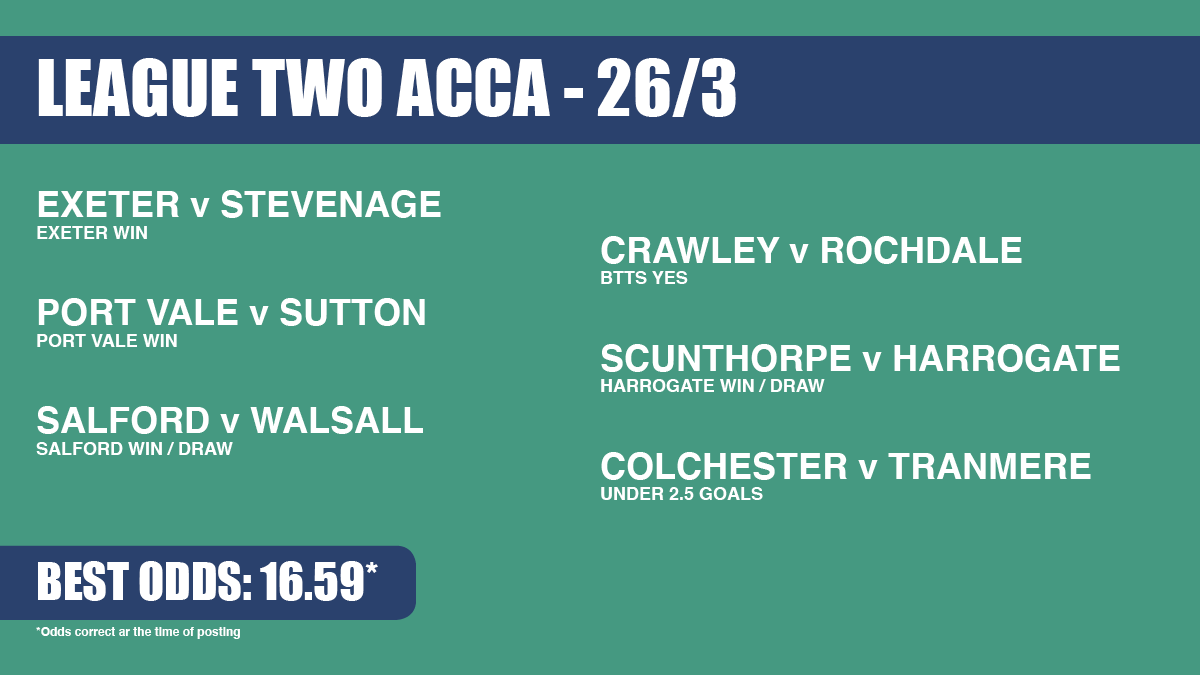 We’re only one short of a full 12 match schedule in League Two this Saturday, meaning there's plenty of action to watch, and to produce a hefty accumulator. Given that our League One acca was a bit light due to the lack of games this week, we’ve gone big on England’s fourth tier with a 5-fold acca at odds of roughly 31/2 at the time of writing.

At first glance, a game between 2nd and 22nd looks like it should be a comfortable win for the home side. And even looking a bit closer, all the stats suggest that it really could be as simple as that.

Exeter have won 5 of their last 7 and 4 of 5 against the bottom 3. Their only draw in those 5 was actually away to Stevenage in the reverse of this fixture back in October 2021. That was a long time ago now though.

Stevenage are winless in 17 away league games, losing 10 of those. They have also struggled consistently against the best teams in the division, home or away, losing 4 of 5 against the top 3.

Exeter have  an excellent record against this opponent at this venue too. They have reeled off 4 consecutive league wins against Stevenage at St. James’ Park too. They should feel very confident going into this clash on Saturday at 3pm.

According to the league table, Sutton are the better team going into this clash, as they sit a place and a point above Port Vale.

However, there are a couple of reasons we're backing the home side. Firstly Port Vale have a game in hand and if they had taken 3 points from that  postponed fixture they would actually be 2 points above Sutton.

Secondly, and more importantly, Sutton have struggled away from home this season while their home form has been good. The newly promoted side have lost 3 of their last 5 on the road and won just 2 of their last 10.

Meanwhile, the home side Port Vale are unbeaten in 7 League Two matches on their own turf, and have won 4 of those. Our algorithm predicts there is a 49% chance that the home side will emerge victorious.

Salford have finally found their feet in League Two after a tricky season which was expected to be so successful for them. The north-west side are unbeaten in 8, winning 4 of those and drawing the same number. They are now 9 points outside the play-offs, but do have 2 games in hand and could yet mount a late promotion push.

The relatively high number of draws for both sides is the reason we’re recommending betting on this match in the double chance market rather than the straightforward windrawwin.

Neither of these sides have played well recently. Scunthorpe will take to the field on Saturday on a run of 8 without a win in the league. Keith Hill’s men have lost all of their last 3, and 6 of 8 during that winless run.

Harrogate are also winless in 7. However, they have generally done well this season against other teams in the lower reaches of the table. Simon Weaver’s men have played 17 matches against teams currently in 14th or below, and have won 10, drawn 3 and lost 3.

That record includes a 6-1 victory over Scunthorpe the last time the sides met in the league. Goals that day came from Muldoon (twice), Pattison (twice), Diamond and Orsi-Dadomo.

BTTS has been a winning bet in 16 of Crawley’s last 20 league games. Given that they’ve only scored 28 (1.4 per game) conceded 27 (1.35 per game) it’s impressive that they've managed to spread their goals around very evenly and score in 17 different matches and concede in 18 over that 20 match period.

Rochdale have not kept a league clean sheet away from home in 6 attempts and you would expect Crawley to register again in this one.

The race for the 3rd automatic promotion spot in League Two could be one of the most exciting storylines in English football as the season draws to a close. Forget Liverpool and Manchester City separated by a point, there are 3 teams locked on an identical number of points in England’s fourth tier. Northampton, Bristol Rovers, and Tranmere all have 63 points and are separated by just 1 on goal difference.

Tranmere have a very mixed away record this season, so even if on the face of it this seems like a golden opportunity for them to secure 3 points against a struggling Colchester side, their record suggests it wouldn’t be a massive shock if they were to slip up and fall behind their rivals.

However, they have been consistent in one thing away from home this campaign - and that's winning under 2.5 goals bets for those who back them. 16 of Tranmere’s last 20 on the road in the league have finished with fewer than 3 goals scored.

Their record for failing to produce thrillers has also been pronounced against struggling sides in home or away games. They have played 11 matches against teams in the bottom 8 this season, and 10 of them have finished with under 2.5 goals.

14 of Colchester’s last 20 home league games have also finished with under 2.5 goals. They shouldn’t spoil the party here by sparking a thriller.

To build your own accumulator check out our dedicated accumulator tips page. Or go here for dedicated League two stats, tips, predictions and match previews.