How do I place a first team to score bet on KickOff?

What first team to score stats does KickOff show and how do they work?

Our team to score first form stats show whether they scored first, the opposition scored first or neither team scored first in their last 20 matches. As with all our form stats by default they show a team’s last 20 at home if they’re playing at home next, and vice versa for the away side. To see stats for their last 20 home or away, click “overall”. To see individual stats from each

What does the first team to score league table show?

The first team to score league table shows a team’s previous matches against every other team in the league in a given season, and whether they scored first, the opposition scored first, or neither team scored at all in those matches.

This can be useful when making a prediction about which team will score first in an upcoming match because you can see how they performed in this market against similar teams in the past.

How do I read it?

Pro members – for just a fiver a month – can sort all first team to score bets by how likely they are to come in, making it a cinch to build an acca in this market. Sign up here to get your first two weeks free.

Correctly predict the team that will score the first goal in a match to win. Alternatively, you can take the ‘none’ option, and if the match is goalless after 90 minutes you win. 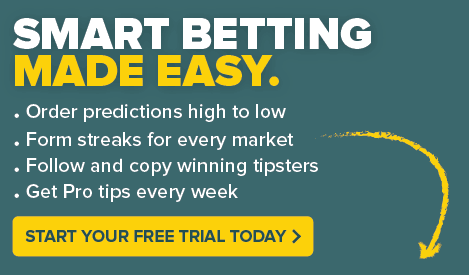 A first team to score tip or bet is when you predict that one team will score the first goal in a game. If they do, your bet’s a winner. If the opposition score first, or the game finishes 0-0 and so no team scores first, then your bet will lose.

This market works really well for building accumulators, as the individual odds are generally quite low (similar to WDW market) and all it takes to win is one goal in the right net so it produces real excitement watching the green ticks pile up. That does mean you have to pick carefully as one wrong move could see the acca come crashing down, so it’s important to find the best first team to score predictions.

Our expert tipsters produce daily tips in the first team to score market across all major leagues and competitions including the Premier League, Champions League and Europa League. You could easily put a few of them together to produce a first team to score acca which would last an entire week! Check out the latest predictions below.

Having conceded the opening goal in eight of their most recent 12 Premier League trips, it is clear that Wolves have a vulnerability in this area, so expect Tottenham to apply plenty of pressure early on. Speaking of the North London outfit, they have grabbed a 1-0 lead in no fewer than 12 of their previous 16 top-flight fixtures at their impressive new ground.

Scoring the first goal has been a major strength as far as Real Madrid are concerned on their top-flight travels recently, with Zinedine Zidane’s charges doing exactly that 15 times in 20 trips. Granada, on the other hand, have conceded the opener in seven of their last 13 home games at this level, so the signs don’t look good ahead of a visit from the capital club.

What does Team to Score First Mean?

Whenever you add a Team to Score First prediction to your KickOff bet slip you are presented with an odds comparison showing the prices offered by leading bookmakers. As you add additional bets to your bet slip these odds change to reflect the folds of your bet. Once your KickOff bet slip is complete you can choose a bookie to wager with.

Build an accumulator or place a single bet using our statistical predictions of likely outcomes in the Premier League, Serie A, La Liga, Bundesliga and Champions League.

All our top Team to Score First predictions for this week’s fixtures are on this page, and you can dig into individual matches to find more. Use our free football tips and build your accumulator or place a bet.

First team to score accas are a great idea, as long as you keep them medium sized. The odds in this market are slightly longer than the BTTS market, and similar to the WDW market.

As with any football bet, doing your research is crucial, and we provide the best stats around to help you find the right first team to score bet. We have form stats which show how many goals a team has scored and conceded as well as how many times they’ve scored the first goal in their last 20 matches.

That’s not all though, exclusive to KickOff are our first team to score league tables which show how a team has fared in matches against similar opponents to the one they’re about to face. Earlier this season, for example, up until January Tottenham Hotspur had scored first in all 10 of their matches against teams in the bottom half of the league, but had conceded first in 83% of their games against teams in the top 9.

80% of winning tipsters on Kick Off are Pro. It costs just £5/month and you can try it free for 2 weeks here. KickOff Pros are able to use the Pro Menu to sort all tips in any market by how likely they are to win. This is great if you’re building a team to score first accumulator, as it allows you to find multiple good tips quickly.